Donna Jean Gifford (71) of Georgetown, Ohio died 12/3/2021 at her home. She was born on 3/2/1950 in Baltimore, the daughter of the late Kenneth Rollin and Dorothy Helen (Scholl) Gifford. She is survived by two sisters – Janice Geschwind (David) of Sun City Center, Florida and Beverly Muriel (Richard) of Williamsburg, Ohio; One Brother – Kenneth Gifford (Barb) from Mount Orab, Ohio and many nieces, nephews, nephews, great nephews and nephews. 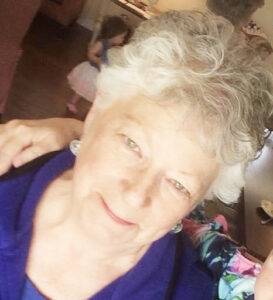 Donna lived a full and fulfilling life. Since we could easily fill out an entire book about her, here are some examples of her adventures (in no particular order): She was an elevator girl in downtown Newstedt; He was a GoGo dancer. Kim’s owns Pizza in Bethel, Ohio – and later the Stockade Steakhouse; flea market supply management in Lebanon; attended the Police Academy in Georgetown; She worked in a Claremont County juvenile detention center—often baking cakes and serving meals to convicts; running a fast food restaurant in Georgetown; They traveled the country to fairs, festivals, and flea markets; He was a security guard at Claremont Hospital; He was a driver for the Senior Citizen Center in Brown County. I helped build two houses, and remodeled many–carrying concrete blocks, timbers, sacks of spruce, and rocks for driveways and walls; She has helped many family members move… many times.

Donna was very creative. She sewed and built small huts and churches with detailed interiors for displays of local crafts. Her aprons were popular, but they eventually became known as THE FUDGE LADY and made 100lbs of waffle, selling them at craft fairs and through private orders. She turned every house she lived in into a warm and loving home; Rescue countless abandoned animals; hosted 100s of yard sales; She was a wife five times; And she enjoyed her bourbon (at times).

Donna loved all of her pets, but the puppy she found in a hole one night was the closest to her heart. “Hooch” has grown to be a loyal and observant companion. He had a long and happy life with her, and she loved him very much (she kept him for much longer than some of her husbands!) Donna talked a lot about her reunion with Hush, and her mother’s hug again. We know she’s happy to see her mom and dad again before the rest of us.

After the cremation, special services will be held by the family in accordance with Donna’s wishes. In lieu of flowers, the family is asking for a donation to Donna’s favorite charity: Miracle House Animal Rescue (Sardinia, Ohio). You can reach them by email at miraclehouserescue@gmail.com or donate directly through their Facebook page https://www.facebook.com/Miracle-House-Animal-Rescue-415198485299/.

Your ‘meal ticket’ can help 300 animals

South Korea: Will dog meat restaurants become a thing of the past?