Primate sanctuary, JNF swing into action to take 1,100 monkeys off state’s back

The Jewish National Fund has agreed to take in more than 1,000 monkeys that were kept in limbo for more than six years after Israel closed the institute where they were bred for experiments.

The monkeys will be transported from Mazor Farm near Petah Tikva, where they used to live in crowded cages, to the Israeli primate sanctuary institution in the Ben Shemen Forest, west of the city of Modi’in, KKL-JNF confirmed on Monday. Meeting at the Ministry of Environmental Protection.

To make room for 1,100 macaques, KKL-JNF will give primate reserve land to expand its habitat in the forest, located near the center of the country. The Ministry of Environmental Protection previously promised to allocate 10 million shekels ($3.2 million) to build new accommodation for the animals.

With the new arrivals, the primate sanctuary will become the largest of its kind in the world.

“We’re starting to feel optimistic after so many years,” said Uri Lineal, the Israel Nature and Parks Authority’s official for the wild animals kept in captivity.

The monkeys are the offspring of about 600 macaques that previously moved to the primate sanctuary in 2013, when then-Minister of Environmental Protection Gilad Erdan ordered the closure of the BFC monkey breeding farm and the sale of its animals.

The farm was established in 1991 to supply monkeys to laboratories in the US, and initially also in the UK, macaques brought from Israel from Mauritius, where the animals are considered pests and can be captured and exported legally.

Activists had been pushing for decades to shut down the farm before Erdan decided to end raising monkeys for experimentation. 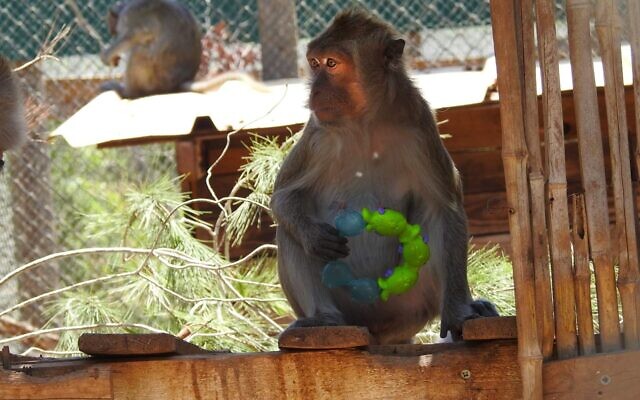 A female monkey originally taken from a forest in Mauritius and used for breeding on a Mazor farm, enjoying a game at her home in IPSF (IPSF)

At the time, the primate sanctuary accepted a request from the Department of Environmental Protection and INPA to take in more than 600 mature monkeys, most of them female. They join about 200 monkeys who previously came to the facility after being rescued from illegal wildlife trade and other abusive situations or adopted for rehabilitation after being released by the labs.

As the state tried to figure out what to do with the more than a thousand offspring left behind, a nonprofit organization called Monkey Rescue stepped in to take control of the farm, using a $2 million donation from Israeli-American animal lover Adi Gil.

Jill funded the food and maintenance for two years. After that, Monkey Rescue found it difficult to raise funds from other places, and the government effectively intervened and agreed to take care of the monkeys until they died. The life expectancy of a macaque in captivity ranges from 25 to 35 years. 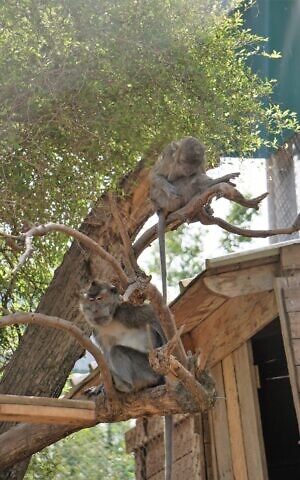 To save money, Monkey Rescue concentrated its shipments in crowded cages of 30 to 40 animals each.

“These animals are very smart,” Tamar Friedman, a world-renowned primatologist who heads the primate sanctuary, told The Times of Israel. “But they have had a bit of motivation for years. And in such cramped conditions, they don’t have a private space either, and that can lead to confrontation and fights.”

On December 1, INPA officially took charge of the monkeys, using the primate sanctuary to care for them.

Friedman has already made a number of changes to improve the lives of the macaques, ranging in age from 8 to 11, even before they were moved to their new habitat in the jungle. Aside from assigning a zoologist to oversee Mazor Farms’ operations, it also added a third meal of various seeds to encourage foraging behavior and brought in games for fertilization.

On Monday, right after the meeting at the Department of Environmental Protection, Friedman took to Facebook to demand a toy donation.

Now that we have another 1,100 kids – the little monkeys still live on Mazor’s farm – we owe lots, lots, lots and lots of toys! If you own…

Friedman also plans to renovate and use some of the old, abandoned cages to ease congestion and experiment with wood chips to cover some of the concrete floors.

Lineal said transferring responsibility to Friedman from an organization that lacked experience and money was a “big step.”

“It’s exciting to see the changes you’re actually making and the way the monkeys are reacting,” Linial said. “A few days ago, I took some old wooden planks full of worms that had been removed from the cages and put them back in. I understood that this would amuse them. At first, they were careful, then the leader approached, then they understood that there were worms and began to argue about who He’d reach the planks first. It gave them hours of activity.”

Friedman is looking forward to quickly meeting with the planning authorities to plan the construction of the new packaging and see how quickly it can be done. A total of 40 acres (10 acres) would be needed to provide 39 groups of macaques with room to roam, swimming pools to swim in, sleeping and inclement shelters and staff access corridors.

“It only shows what can be achieved when all the relevant bodies come together and decide to act,” she said.

you are serious we appreciate that!

We are really glad you read X Times of Israel articles in the last month.

That’s why we come to work every day – to provide discerning readers like you with must-read coverage of Israel and the Jewish world.

So far we have a request. Unlike other news outlets, we have not put in place a paywall. But since the journalism we do is costly, we invite readers for whom The Times of Israel has become important to help support our work by joining The Times of Israel community.

For as little as $6 a month, you can help support our quality journalism while enjoying The Times of Israel Free ads, as well as access to exclusive content available only to members of the Times of Israel community.

Previous articleBloemfontein Zoo animals – some thriving, some dead, some mysteriously missing
Next articleElon Musk Will Build a Futuristic Noah’s Ark to Help With Colonizing Mars